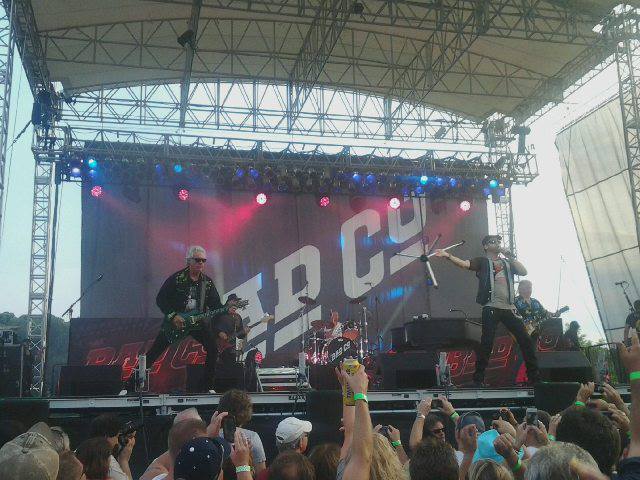 On any given Tuesday throughout the summer, the imperial backdrop of the Niagara Gorge is converted into a musical agora of sorts for Western New Yorkers hungry to summon a taste of what their lives were like in the days prior to children and cholesterol.

They descend upon the Artpark compound in a flash, braving steamy temperatures, crowded restrooms, and even their fellow concertgoers as part of a scheme to orchestrate their very own “Big Chill” moment. Every week is a reunion and whatever classic rock titan the venue has booked assumes the role of house band for the evening.

The usual onslaught of prosaic “old geezer” jokes had no business here, because, despite their actual ages, Rodgers and Kirke don’t appear to be a millisecond older than 40.

Here were legends of the game still singing and performing at their peak after 40 years together, so all aspiring musicians in attendance should have had their iPhones handy for note-taking.

The only negative (or not) to emerge from last night’s clinic is that Christina Aguilera, Adam Levine, CeeLo Green, and Blake Shelton are no longer needed to conduct their tedious search for “The Voice,” because I already found him.

His name is Paul Bernard Rodgers and he was in Lewiston last night.

For those who had never heard Rodgers sing live before, the initial blast of “Rock ‘N’ Roll Fantasy” must have been quite jarring, because, with all the soulless imitations parading around, it’s a wonder that anyone recalls what a master vocalist is supposed to sound like. His bluesy nuances, commanding demeanor, and untethered affection for the audience set the stage for an enlivening set of gems mined from the first five Bad Company albums.

“Burnin’ Sky” piggybacked on the force of ‘Fantasy,’ while “Run with the Pack” and “Feel Like Makin’ Love” brought to life the lavish harmonies and down-and-dirty Mick Ralphs soloing that gave those early recordings their sizzle.

Even the deeper cuts such as “Electricland” and “Gone Gone Gone” had the crowd clinging to every note, the latter serving as an extended jam session in tribute to late bassist/writer of the song Boz Burrell, who died in 2006.

While the first eight songs of the show could have satisfied anyone in need of a fix, the final six pushed it into another stratosphere altogether.

“Shooting Star” initiated the anthemic sing-along portion of the evening and the audience’s power in that moment was rewarded with an encore tailor-made to have people’s ears humming all the way home.

“Bad Company,” “Rock Steady,” and a little acoustic delight called “Seagull” sealed the deal with a professional polish that could only come from a band that has been at it as long as Bad Company.

They came, they played, and they conquered the Artpark stage in a way that no other band left on the schedule will.

Cherish it folks, because, before you know it, Bieber will be back in Buffalo to lure even more children away from the music we all know and love.