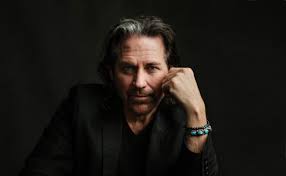 His parents were members of a Jazz trio and raised their children in an environment where music was either played, listened to, or talked about in every way imaginable.

He played bass for Alice Cooper on three studio albums during the 1980s, composed a symphony titled, “Ghosts (Suite No. 1),” which debuted with the San Francisco Ballet in 2010, and became the voice of the Alan Parsons Live Project in 2013.

He was even recruited to complete session work on Bob Dylan’s “Down in the Groove” album in 1988, an exceptional experience despite not having any one-on-one time with the myth himself.

The $64,000 question is why this misunderstood artist remains a casualty of the grunge movement given his resumé and musical aptitude. He’s clearly soared beyond anything the mainstream recognizes him for, and, had his band coalesced under different circumstances, perhaps we wouldn’t have had to wait seven years for all five original members to reunite.

Have you figured out who I’m describing? Have you trolled through the Rolodex of your mind in search of a potential candidate who meets each criterion?

Well, the name you’re in search of is Kip Winger, and you’d be forgiven for not immediately shouting his name to the heavens.

Winger isn’t exactly a household name these days in light of the band’s reputation, fair or not, for embodying everything that was wrong with the pretty boy image of the glam scene, but not that he allows such things to bother him. He knows what he’s capable of  and lets his projects speak for themselves, even if people still wonder how he felt when he saw Lars Ulrich removing darts from his face in Metallica’s “Nothing Else Matters” video.

I had the opportunity to speak with Kip recently about what he’s been working on. and, of all the interviews I’ve conducted, this one really surprised me.

The more he spoke, the more I realized that listening to “Seventeen” and “Miles Away” just doesn’t come close to capturing the breadth of his talent. Only when you break down his career and filter out all the preconceived notions will you come to respect his legacy as both a person and an artist.

Question: What projects have you been working on lately?

Winger: While I’m always working on various things, right now I’m completely dedicated to the new Winger album, “Better Days Comin,’” due out on April 23.  We’ve released some videos through the Internet and have received a good reaction thus far, so I’m putting all my force behind it going forward.  We’re hoping to tour for the rest of the year and maybe into next depending on how things work out.

Question: I read that your parents were jazz musicians.  How much of an impact did they have on your musical direction in the early days?

Winger: A lot, because they were involved in shaping my life from the beginning.  I started in a rock band with my brother and growing up with musical parents definitely influenced our development early on, so I’d say that the impact was immense.  How could it not be, you know?

Question: I know you’re inspired by the work of classical composers such as Debussy and Stravinsky. How did that lead you into a hard rock lifestyle?

Winger: I’m actually a self-taught rock musician who didn’t get into classical until later in life, so the music I make is really a cross between the two.  What I hear in my inner ear is classical and I’ve always read piano music, but not until I was in my 20s and 30s did I start seriously pursuing that style.

Question: People tend to associate Winger with being just another glam band without really digging into the material. Do you ever feel frustrated with the fact that the band may not have gotten a fair shake initially?

Winger: Not really.  I think we’ve always been a misunderstood band, but people are starting to get it now.  Because of the Internet, the prejudice that once existed against our band isn’t really there anymore, and the real fans know what we’re about.  People can do their own research regarding our material now and decide for themselves.

Question: What does composing for the ballet do for your creative side that hard rock doesn’t?

Winger: I wouldn’t say it’s like that, because it’s a different form of expression.  For me, it’s always come down to long-form vs. short-form music.  I wouldn’t recommend anyone attempt long-form unless you really have a passion for it.  It’s a lot of work and there’s not much reward outside of personal satisfaction.  Whether I’m writing for the ballet or for Winger, one really feeds the other.

Question: The venue you’ll be playing has come to specialize in bringing ’80s bands to the western New York masses. What is it about that era that you believe still resonates with audiences?

Winger: I think any era of music that was popular will find an audience regardless of how much time has passed.  A lot of good guitar players came out of that era, so people really get into that aspect of it.  Really, though, I think the individual artist or band makes the difference, because, if you’ve established a fan base, the audiences will always be there.

Kip Winger is playing an acoustic set at Braun’s Bar and Grill on April 9 and 11.

Rob Bilson from Seven Day Faith and guitarist Jason Neubauer of That 80’s Hair Band will open the show on April 9.

Tickets are $15 and are available at http://www.ticketweb.com, Braun’s Bar and Grill, Stylin’ Tattoo and Braun’s Chiropractic.