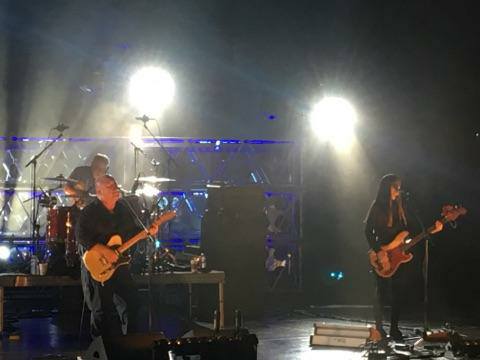 Standing front row for the Pixies during their recent scorcher at The Rapids Theatre was what I like to refer to as a cultural colon cleanse. When Frank Black unleashed his primal scream during “Caribou,” it was as if all the cacophonous toxins I had been subjected to during the 2015 Billboard Music Awards the weekend prior were purged from my system, leaving me free once again to enjoy life as a lover of music whose sole purpose isn’t to hypnotize the masses into thinking that they don’t deserve something better.

It’s not until you’re face-to-face with one of the most influential alternative bands of our time that you realize how far society’s standards have fallen down the rabbit hole, because even current artists that you kind of enjoy begin to taste vanilla after that.  Anyone who snubbed their nose at this booking in allegiance to former bassist Kim Deal cheated themselves out of experiencing four musicians whose collective intensity far outweighed anything else going on in western New York that night.

Leading off with a seductive cover of David Lynch and Peter Ivers’s “In Heaven (Lady in the Radiator Song)” may have puzzled those who came solely for the favorites, but I’ve always felt that the eccentricity of “Eraserhead” meshes with the band’s offbeat sensibility in a way that shouldn’t be downplayed.  It set the tone for the show and let the packed house know that the Pixies had finally made their way to Niagara Falls.

Despite leaving his sunglasses on the whole night, Frank Black clearly loved every minute of the performance, as he snarled his way through “Gouge Away,” “Nimrod’s Son,” and “Wave of Mutilation” without once appearing bored or in need of further stimulation.  His lyrics tend to be a whirlwind of free association scribbling that begs to be overanalyzed by scholars and the varying cadences with which he delivers each line on stage are fascinating to watch.  Turning 50 must have stoked his internal fire, because that voice is still capable of penetrating the soul like few others can.

The press release disseminated prior to the show stated that the Pixies would by playing “what they want, when they want,” which is a philosophy I wish more bands would adopt.  There’s something to be said for a band ditching the script and treating its fans to an organic evening of semi-organized chaos, and the Pixies appeared to feed off the flexibility.

Joey Santiago’s voracious guitar solo in the middle of “Vamos” nearly stole the show, while the physicality of David Lovering’s drumming kept getting more monstrous as the night wore on.  Both attack their instruments with a manic attention to detail that could only come from spending the last 30 years striving to bring out the best in each other.  Lovering even had the opportunity to shine vocally on “La La Love You,” a song from 1989’s “Doolittle” that put a smile on his face almost as wide as the room in which he was singing it.

Paz Lenchantin was the member everyone couldn’t wait to scrutinize, but the fact that she’s absolutely killing it on this tour must be driving all the haters crazy.  Not only is her bass playing tight, but she also possesses that irresistible onstage quirkiness complete with the Mona Lisa smile once perfected by Kim Deal back in the late 1980s.

All together, the 2015 version of the Pixies is an unstoppable musical force with no kryptonite in sight, because every song builds on the greatness of what came before.

“What Goes Boom,” “Hey,” “Planet of Sound,” “Where is My Mind,” “Blue Eyed Hexe” and “Debaser” were all played, and not one of them disappointed in its live incarnation.

“Death to the Pixies” was the title the band’s 1997 Greatest Hits album, but let’s all pray that it never goes any further than that.

As the previous weekend’s Billboard festivities proved, we still need them.