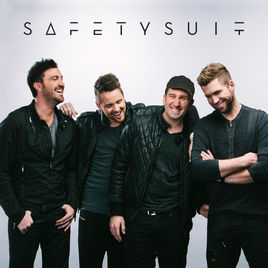 Rising pop-rock troupe SafetySuit released its first album, “Life Left to Go,” on May 13, 2008 and the exalting title appeared to say just as much about the band as it did the members themselves.  Spotlighted by VH1 as a band “You Oughta Know,” the group has toured endlessly since, playing over 200 shows and selling more than 500,000 singles along the way. The Nashville-based rockers’ latest single “Get Around This” debuted in the top 10 on iTunes’s Rock Songs Chart and they just kicked off a string of dates with The Script on May 31, so the party doesn’t appear to be ending anytime soon.

I spoke with lead singer/guitarist Doug Brown recently about the band’s ongoing developments and, if his modesty is any indication, SafetySuit could be on its way to becoming a major player within the Top 40 scene.

Brown: Well, we wanted something that was universal for all of us.  The four of us in the band have been friends forever.  We’re in a safe environment…and that makes us feel free to be who we are.  SafetySuit sounded weird and interesting, so the name stuck.

MNOD: How would you describe the band’s sound?

Brown:  I like to think of it as emotional, energetic pop-rock that anyone can get into.

MNOD: How did starting out in Tulsa influence your musical direction?

Brown:  I don’t know if it did too much.  I suppose living in kind of a small pond helped build our confidence and fanbase, but we’re in Nashville now and that plays a bigger role in our development.

MNOD: What type of music did you listen to growing up?

Brown: My musical interest has always been across the board.  I’m a huge fan of Sting and everything that he does.  I also love bands such as Guns N’ Roses, Allman Brothers, The Eagles and Crosby, Stills, Nash and Young, so classic rock is definitely my favorite.

MNOD: How has the band evolved since the release of the first album?

Brown: I think we’ve figured a lot of things out along the way.  For this new record, we wanted to make things simpler and let the songs really shine through.

MNOD: How did the band first come together?

Brown: We’ve all been friends a long time and used to play together for fun until we won a Battle of the Bands competition and took off from there.

MNOD: How did the song “Get Around This” come about?

Brown: It’s about a fractured relationship involving heavy betrayal.  It’s a screwed situation that will hopefully be resolved through understanding and getting around the problem.

MNOD: What was it like playing on Vh1’s Best Cruise Ever?

Brown: We had a great time.  It was a really cool feeling to finish playing a show and be able to walk right out and party with the fans on the ship.  The Script was also on the cruise and we became really close with them, so that led to our current tour arrangements.

MNOD:  I really like the song “Annie” from the first album.  How emotional was that to get through?

Brown:  Well, I’m an older brother and I see a lot of young girls who are disgusted with their self-image, which doesn’t seem right.  I meet a lot of girls on tour who are nice and pretty yet lack the self-confidence of other kids their age.  I think you have to believe in yourself first and find an inner balance that will carry over into adulthood.

MNOD:  Who has been the coolest band you’ve met since arriving on the scene?

Brown: It’s hard to single out just one, because they’ve all been great.  Bands such as Three Doors Down, Collective Soul, Lifehouse and Train are all groups who have inspired us and I was pleasantly surprised at how nice they were to us.

MNOD: How did the success of the first album influence your approach to the new album?

Brown: I don’t want to say that our first record was any phenomenal breakout smash, but I think it did well with fans.  We’re not comfortable with being complacent and we wanted to avoid a sophomore slump.  Our live show has evolved right along with the recorded material, so we’ve challenged ourselves to grow creatively.  I’ve always loved artists like Springsteen and U2 who are able to connect with people through a stunning live experience and that’s what we want to achieve.