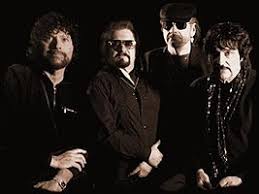 Long before the saturation of MTV set out to corrupt the imaginations of music lovers the world over, experimental artists such as Vanilla Fudge actually had an incentive to use their medium in a unique way.

Instead of relying on the often-reductive vision of Hollywood auteurs to pique interest, the music sold itself through the sheer force and euphoric nature of the composition.  Listeners simply lit a candle, dropped the needle, and evanesced to a realm where the only images were those stemming from their own subconscious mind.

I know that might be a difficult concept to grasp in 2012, but, luckily for us, the interpretive genius of Vanilla Fudge will be on full display this Wednesday night at Buffalo’s Tralf Music Hall for all to see.

Led by Vocalist/organist Mark Stein, the Fudge’s ability to take popular songs, slow them down, and sprinkle their own dramatic nuances on top can’t be missed, so I urge everyone to ignore American Idol in favor of some old-fashioned polyrhythmic grooves that exude more passion than Fox could ever dream of.

If you don’t believe me, perhaps my recent interview with Stein himself will seal the deal.

MNOD: Given that Vanilla Fudge is now in its forty-sixth year of existence, how do you maintain the same enthusiasm for live performance?

Stein: That’s a good question. We don’t really think about it anymore, because the energy of the fans takes over. People still love to come hear our music, and we’ve all matured to the point that we love every part of it.

MNOD:  A lot of bands from your era are no longer together.  Why do you think you guys still work so well as a unit?

Stein: It’s chemistry, really. There’s a magic that emerges when we’re on stage, and we really get into it. Of course, things were often volatile, but time has whittled down our egos to the point where we can really rock.

MNOD: What can audiences expect from the band’s live set in 2012?

Stein: We’re basically giving people what they want. We’re doing stuff from the first album and the third album, Renaissance, complete with plenty of crowd-pleasing solos.  Also, we’ll be playing some songs from our 2007 tribute to Led Zeppelin called “Our Through the In Door,” which included “Dazed and Confused” and “Babe, I’m Gonna Leave You,” so people should enjoy it a great deal.

Question: The band has always been known for its unique style and vocal arrangements. How would you describe what Vanilla Fudge was about in the early days?

Stein: Well, it was the late 1960s, and we were the first band to really pull apart popular songs.We slowed them down and added some dark, almost funeral-like vibes to a lot of them. We weren’t really songwriters in those days, but our sound and musical capabilities were constantly evolving. For example, we covered a song like “Eleanor Rigby” from The Beatles, and took it to an even more dramatic level.

Question:  You’ve also been hailed as pioneers of the ‘Psychedelic Era.’ What do you think about that association today?

Stein: I’m proud of that association. I think that period represented a true renaissance in American History in terms of music, art, and experimental thinking, so it’s really cool to still be around today to look back on it. I’m currently in the process of releasing a book with historian Larry Schweikart covering 50 years of rock history, which marks the first time that a real historian has attempted to capture that subject. I’m lucky to have toured with Hendrix, Zeppelin, and other greats, so I felt that now was the time to get my story out there. My life has always been music, and the book is filled with great interviews from Deep Purple, Robbie Krieger, and Billy Joel, to name a few. The release is imminent, so be sure to look out for it soon.

MNOD:  Who were some of your influences?

Stein: I’d have to say that Felix Cavaliere from the Young Rascals with his massive sound definitely influenced me on the keyboard. Vocally, singers such as Dusty Springfield and Wilson Pickett always impressed me with their style and soul vibes.

MNOD: You also spent some time as a member of legendary guitarist Tommy Bolin’s band.  How do you reflect back on that experience?

Stein: That was a great experience. I had taken a sabbatical from music for a while, and I was looking to get back into something when Tommy’s project came along. When he left Deep Purple, he wanted to get something really infused with that melodic 1970s New York sound, so the combination made for an exciting band. We really clicked in a live setting, and Tommy has such a phenomenal playing style. I’m sorry that he only lived to 25 years old, because, had the drinking and drugs not gotten in the way, he would’ve gone on to be one of the all-time greats.

MNOD: What would you say is your favorite moment as a member of Vanilla Fudge?

Stein: Well, we were in England in 1967 when we found out that we had our first Top-10 album on the Billboard charts, so that really broke us through to real stardom.  Also, playing the Ed Sullivan Show, and the gigs with Zeppelin are special moments for me, so I’m glad to have been a part of it all.