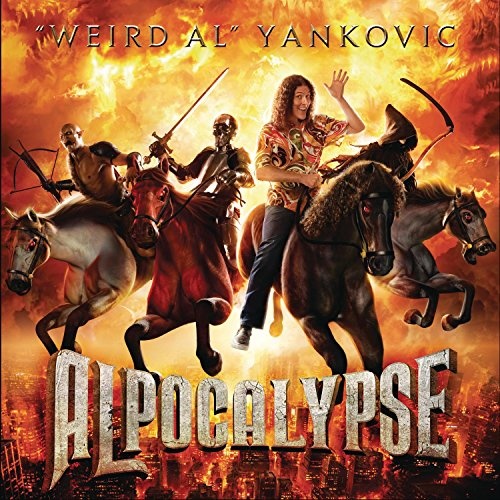 My earliest memories of “Weird” Al Yankovic are the 1996 Al TV segments in which he conducted faux celebrity interviews and engaged in all sorts of hijinks around the Greater Los Angeles area.

Whether it was getting a tattoo of former MTV VJ Kennedy on his arm or indulging in a sandwich made up of peanut butter, lime Jell-O, and mustard on whole wheat toast, Al’s oddball disposition and astute sense of humor won me over instantly. He manipulated the inanity of mainstream music in such a way that his parodies often became more popular than the originals, so, if you thought he would vanish right along with Beanie Babies and the Tamagotchi, consider yourself corrected.

Not only has his work gotten progressively better through the years, his 13th studio album “Alpocalypse” (due out June 21) ranks among his best yet.

Songs such as “Craigslist” and “Whatever You Like” display his versatility as a vocalist while the exuberant medley “Polka Face” goes back to his roots as an accomplished accordionist.  I find the entire album to have been well worth the five-year wait, and, given the overall state of music in 2011, what would we do without Al around to make tracks from Ke$ha and Miley Cyrus suddenly appear tolerable?

I spoke with Al recently about the album as well as what fans can expect from his show at UB’s Center for the Arts on July 13 and he was every bit as enjoyable as his music would suggest.

MNOD: How did you decide on the name “Alpocalypse?”

Yankovic: That was an idea I’d been thinking about for a few years and I had it written down in a notebook along with other concepts. We’re closer to the end of the world now than we’ve ever been before, so the title works well.

MNOD: It’s been five years since you released your last studio album. How did the delay impact the the strength of “Alpocalypse?”

Yankovic: The delay certainly wasn’t intentional. I’ve been releasing songs here and there for the past few years, but finally put together a whole album’s worth of material. I consider every album to be the best thing I’ve ever done, so it’s getting harder to top each time out.

MNOD: How has your approach to selecting parodies changed since you first started out?

Yankovic: It hasn’t changed that much really.  I try to find songs that are popular or identifiable and then ask the artist for permission.

MNOD: Are there any artists whom you think lend themselves to parody more easily than others?

Yankovic:  It really depends on the song.  A lot of rap or pop songs that use repetition work well, because there’s usually some interesting wordplay involved.

MNOD: How did it feel having Ray Manzarek contribute to the album?

Yankovic:  It was a huge thrill for me. I’ve always been a huge fan of The Doors and he’s certainly an iconic rock figure in his own right. He’s a great guy with a great sense of humor and I enjoyed having him in the studio.

MNOD:  How did it feel when Lady Gaga personally gave you the green light to release “Perform This Way?”

Yankovic: I was devastated when her manager initially turned me down, so having her personally reverse the decision was really cool.  When she was quoted in Rolling Stone as saying that it was a rite of passage to have her song parodied by me, I felt good about the whole situation.  All proceeds from the song were donated to the Human Rights Campaign.

MNOD: Where did the idea for a song about Charles Nelson Reilly come from?

Yankovic:  It was mostly just a random thought I had.  I’ve always been a fan of his films, so I thought it would be funny to write a song about him.  I think there’s a bit of an age gap for people who appreciate both Charles Nelson Reilly and The White Stripes, but the song turned out well.  It was really for my own personal amusement.

MNOD: On previous albums, you’ve included songs that exceeded eight minutes in length.  Did you try to avoid that this time around?

Yankovic: Not specifically.  Songs like “Trapped in the Drive-Thru” and “Genius in France” were long, because that’s simply what the music called for.

MNOD: Were there any songs that you wrote, but, for whatever reason, didn’t make it on the album?

Yankovic: No, actually.  I was able to get permission for everything I wanted and I never prepare more songs than the record needs.

Question: I remember you performing the Offspring parody “Laundry Day” during  concerts in the late ‘90s.  Are there any songs that you save solely for the live setting?

Yankovic: There are some that essentially had one-joke premises that we’ll play live or others that are funny at the moment.

Question:  You’ve had the good fortune of playing with the same band throughout your entire career.  Why do you think you jell so well together?

Yankovic:  We get along really well.  They’ve been able to tackle every genre I’ve thrown at them and we just enjoy being together.  They’re all down-to-earth guys with a sense of humor and they also happen to be amazing musicians, so I’ve been fortunate in that respect.

MNOD: I’m a big fan of “UHF.”  Have you ever considered doing another feature film?

Yankovic:  I’d love to. I actually had some discussions right after “UHF” came out in 1989, but nothing ever came of them.  I’ve come close a few times since then and Cartoon Network has approached me about doing some things, so we’ll see how it goes.

MNOD: Now that you’re 13 albums into your career, what’s the most striking change you’ve noticed within the music industry?

Yankovic: Well, I think music has become a lot more disposable. Songs are shorter and more artists are using auto tune. The music industry is going through a phase where no real instruments are being used, but I think the cycle will come back around and we could see a return to the garage band vibe.

MNOD: You’ve played Western New York many times before. What can fans expect this time out?

Yankovic: If people have seen me before, they can expect a similar experience with clips, costume changes and a very theatrical setup.  The show is 2 hours and 15 minutes with no break, so be sure to void your bladder before coming in.