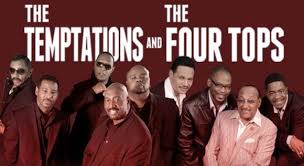 Being a nostalgia act in 2013 can’t be the most desirable position for an artist to occupy.

In Western New York, that position is made even more unstable by the growing number of bars, clubs, and outdoor venues that become visible as part of the area’s dedication to year-round musical excess.

Consumers are forced to choose what to attend based on appeal, atmosphere, and affordability, which, for many, isn’t as effortless of a decision as it once was.

Because of this, an act living off past achievement with little or no new material to speak of must either maintain a rabid fan base, or employ a persistent PR representative who can sell them as still being able to deliver the goods on a nightly basis.

In the case of The Temptations and The Four Tops, their collective catalog of music is so beloved by those who came of age during the Motown era that the absence of seven original members didn’t affect Saturday night’s performances inside the Seneca Niagara Events Center one iota.

The crowd was taken in from the beginning as The Four Tops graced the stage wearing matching outfits and crooning “Baby I Need Your Loving” in a way that couldn’t help but make one grin openly.  Their groovy vocals and synchronized stage movements are staples of the genre and would be welcomed additions to current pop groups looking for advice on how to engage an audience.

Led by original member Abdul “Duke” Fakir, the group took the fans back in time with classics such as “It’s the Same Old Song,” “Reach Out (I’ll Be There),” and “I Can’t Help Myself (Sugar Pie Honey Bunch).”

Lawrence Payton Jr., son of original member Lawrence Payton, provided the most emotive moment of the evening when he dedicated the Luther Vandross hit “Dance with My Father” to his late father with a performance likely to stay with people long after the summer has ended.

Following a brief intermission, The Temptations electrified the crowd with their own brand of Motown magic.

“My Girl,” “Papa Was a Rolling Stone,” and “Ain’t Too Proud to Beg” gave the serious fans ample opportunity to dance in the aisles as lead vocalist Bruce Williamson did his best to honor David Ruffin’s legacy with the pizzazz it deserves.

At 71, sole original member Otis Williams proved he can still shake it with the best of them, because he didn’t appear to stop moving all night.  Also, when it came time for him take the lead, he showed why his striking baritone was an invaluable asset to those early Temptations records.

Given the abnormal circumstances in which the majority of Williams’ former bandmates died, the criticism he has received for carrying on in their wake is unfair.  Perhaps, if he wasn’t doing such a commendable job with it, the time might be right to hang it up, but that’s just not the case.

Both of these groups do justice to the past while, at the same time, give their younger members a chance to shine on stage, which is never a bad thing.