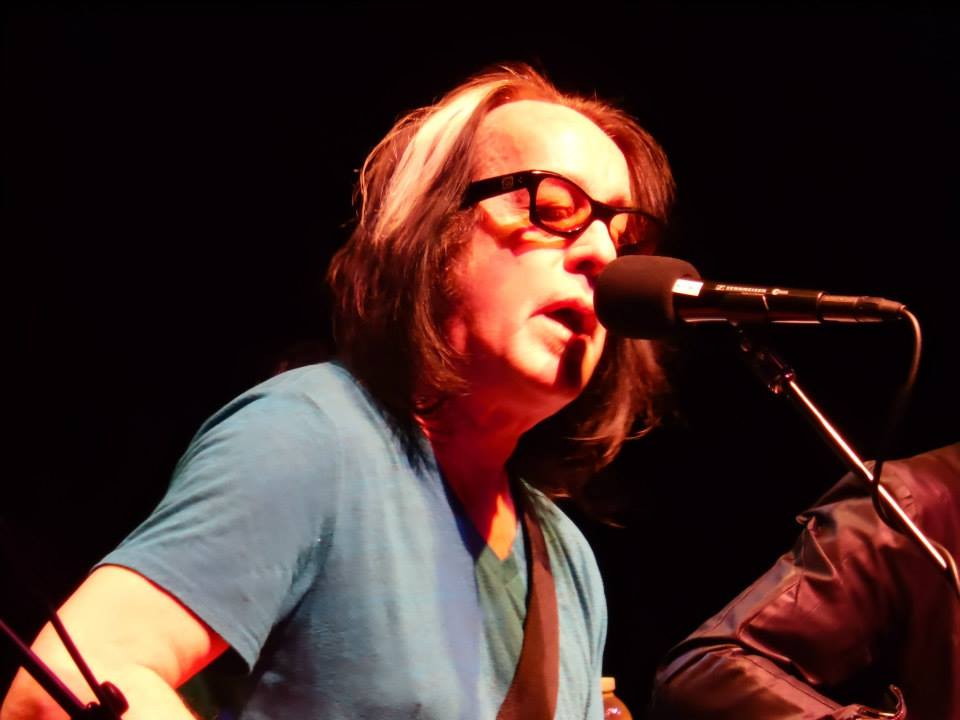 Only Todd Rundgren would open a show with a cover of Rebecca Black’s “Friday.” Only an artist whose reputation for refusing to be shackled by mainstream expectations precedes him could take a cornball Internet sensation and repurpose it into a triumphant song of praise for the working class heroes who ventured through the yawning potholes of Niagara Falls to see him.

Think about it. 440 souls persevered through the 40-hour (or more) work week just to have an opportunity to experience Todd in one of the coziest rooms Western New York has to offer, and, in seconds flat, he rewards them a with fire-in-the-belly rendition of a song that most of them probably never knew existed until that night. They were in need of relief from the daily grind of life and used that moment to let it all hang out before settling into what would be a musical affair to remember.

Because Todd played a show at Buffalo’s Canalside last summer, the fact that he would use his time inside The Bear’s Den to challenge people with a revolving setlist made the gig an attractive one for diehard fans of his catalog. Instead of being showered with the usual suspects of “Love is the Answer,” “Can We Still Be Friends,” and “Couldn’t I Just Tell You,” this time around the fans were left guessing what would come next, a strategy enabled by the fact that the Rundgren oeuvre defies the everyday expectation of what it means to be an artist.

He released three albums of psychedelic garage rock with The Nazz from 1967-1971, 10 albums as the leader of progressive rock outfit Utopia between 1974 and 1985, and 21 studio recordings as a solo artist since 1970, and the only constant through all of them was the genius of Rundgren himself.

I don’t use that term lightly, either, because he’s exactly the type of visionary for whom such superlatives should be reserved. He never coasted, he never “sold out,” and he was never immersed in the business of being a rock star the way Jon Bon Jovi or Gene Simmons were or still very much are.

The music was second to none, and, while so many of his contemporaries allowed egos to run amok, he had too much respect for himself and his fans to ever make the same album twice, let alone give Western New York the same show in a seven month span.

Splitting time between guitar and piano, Todd pulled out “Love of the Common Man,” “I Don’t Want to Tie You Down,” and “It Wouldn’t Have Made Any Difference,” impressive-yet-familiar tracks designed to keep the passive members of the audience interested long enough to stick around for the real gems arriving in the form of “Born to Synthesize” and “Lysistrata.”

Those who were at Canalside may remember how it took a song or two for his vocal cords to find the sweet spot before settling into an irresistible groove. Such an extended warm-up wasn’t necessary on this night, as everyone could tell that he had it in droves right from the opening hook. Consider a ferocious “Black and White” in which the entire band channeled its energies into a performance worthy of the unpredictable mystique.

Further enforcing the unpredictability were covers of “In the Year 2525,” “96 Tears,” and Daft Punk’s Grammy-winning smash “Get Lucky,” which was accompanied by an anecdote detailing Todd’s awkward encounter with the French electronic duo following this year’s ceremony.

By the time he closed out the show with Utopia’s “One World,” the separation between audience and artist had dwindled down to nothing given how swiftly everyone stormed the stage trying to get an autograph.

Clotheslining your fellow Toddheads just to get a signed copy of “Oops! Wrong Planet” may appear necessary for some, but having experienced the show itself was the only memento I needed.