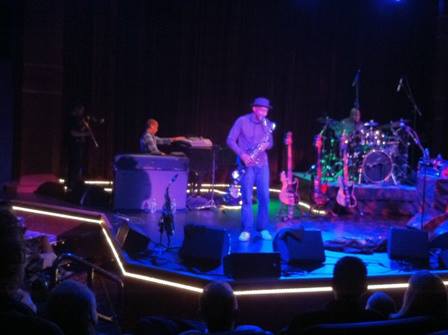 I found myself revisiting Cameron Crowe’s bittersweet realization a lot this year.  His assertion that music can swathe your soul in times of unsolicited anguish resonated with me in a way I wasn’t quite ready for.  I was faced with a situation in which retreating into music provided a much needed reprieve from one of the most perplexing ordeals of my life and, most nights, I felt as if I couldn’t get to a show fast enough.

When things spiraled from bad to worse, I simply hopped in the car, cranked the stereo, and retreated to a world where honesty is still regarded as a virtue.  The best concerts have a way of cleansing one’s qi of anything considered harmful to its long-term stability, so I’d like to think that I made significant strides during the latter half of 2013 to ensure that my positive energy flow once again approaches a Confucian level.

Like Penny Lane, I believe in the record store’s ability to make you feel as if you’re home again, especially when your actual home is a breeding ground for deception and vitriolic shouting matches which occur with minimal provocation.  Albums don’t lie, cheat, or steal, and they certainly don’t go out of their way to exacerbate any distress you happen to be experiencing in the moment.  You put a record on with an expectation that its contents will infuse your consciousness with whatever oomph is necessary to elevate your mood, which, if you’re like me, even the most melancholy compositions can usually do the trick.

The fact that I also got married this year allowed me to keep things on an even keel, because the goodwill and spiritual revitalization stemming from the wedding essentially outweighed whatever personal issues arose which were outside my realm of control.

Year-end recaps have always been about analyzing the past 12 months and letting go of all that is better left in the past, and that’s exactly what I plan to do.  I’m going to look ahead to 2014 with unbridled optimism, a feeling that eluded me more than once in 2013 as I sought to make sense of the nonsensical.  I hate to get too real about what was an otherwise stellar year for music in Western New York, but readers of this space know that I’m incapable of dealing with things in any other way.  My print personality and my everyday personality are one and the same, and I’d like to think that people still value such a quality in their journalists.  I believe that I took my writing to another level this year and I vow to elevate even higher in 2014.

Before I dig into my selections for the best local concerts of 2013, I have a few random musical notes to offer up that have been brewing in my brain for far too long.  I’ll probably never grant these artists my attention again unless they create something of consequence, so consider this a freebie:

Miley Cyrus – At some point, Miley needs to decide whether she wants to be an artist or just another sex-object-of-the-week sideshow whose sole purpose is to generate social media activity.  Until then, there are far too many female musicians operating with more talent and less fanfare to bother with a superficial pop princess in need of a millennial reality check.

Arcade Fire – As an admirer of the band’s early work, I found Reflektor and the controversy surrounding the band’s audience dress code request to be pretentious to the hilt.  I think they’ve fallen victim to their own hype machine in a lot of ways, because, while talented, they’ve almost assumed the role of this generation’s seminal art-rock outfit by default when you consider how weak the field has gotten.  While the title track is killer, the rest of the album’s 80s club vibe is hit-or-miss depending on one’s tolerance for self-aggrandizement.

Britney Spears – She’s clinging to fame by the skin of her much-publicized derriere while preparing for her Vegas residency, but does anyone still care?  The music was never that exciting to begin with and the early reports of her nasty lip-synching habit have left me pondering how people can spend money on such a debacle given the current economic lull.

Now that we’ve gotten those out of the way, I present to you my picks for Western New York’s finest musical happenings of 2013:

Dr. John and the Lower 911 at Seneca Niagara Casino – The Nite Tripper led a sizzling array of musicians into The Bear’s Den for a stroll through the back alley echoes of New Orleans.  See my full review here: http://www.examiner.com/review/dr-john-the-lower-911-bring-the-funk-to-seneca-niagara

Jewel at Seneca Niagara Casino – Her voice was revelatory in the unplugged setting, so why anyone would continue to waste their time searching for the next great voice via television is beyond me.  See my full review here: http://www.examiner.com/review/jewel-s-greatest-hits-tour-is-a-sight-to-behold

Steven Wilson at Town Ballroom – Not only was it the show of the year, but quite possibly my entire life, as well.  See my full review here: http://www.examiner.com/review/steven-wilson-gives-buffalo-an-unforgettable-evening

Cheech and Chong at The Riviera Theatre – Watching the subversive comedy legends at the top of their game after 40+ years together would be a highlight of any year.  “Dave,” “Basketball Jones,” “Santa and His Old Lady,” “Earache in My Eye,” and “Blind Melon Chitlin’” are timeless comedic gems.  See my full preview here: http://www.examiner.com/article/cheech-and-chong-come-to-riviera-tomorrow-night

Steve Earle at Seneca Niagara Casino – The man, the myth, the beard.  I wasn’t sure which Earle would grace us back in May, but the blend of old favorites and new classics from The Low Highway made his performance an unforgettable one.  See my full review here: http://www.examiner.com/review/steve-earle-and-the-dukes-deliver-stellar-casino-set

David Bromberg Quintet at Seneca Niagara Casino – Admittedly, this show was a total wild card in the weeks leading up, but the result was stunning, to say the least.  See my full review here: http://www.examiner.com/review/david-bromberg-quintet-sizzles-at-seneca-niagara

Marcus Miller at Seneca Niagara Casino – My raving about this show is well-documented.  See my full review here: http://www.examiner.com/review/marcus-miller-leaves-casino-crowd-hungry-for-more

The Flaming Lips at Artpark – Night Two of sweat-soaked bliss at Artpark found The Flaming Lips treating the crowd to an epic psychedelic journey.  See my interview with Wayne Coyne here: http://www.examiner.com/article/an-interview-with-flaming-lips-visionary-wayne-coyne

The Tragically Hip/Grace Potter and the Nocturnals at Buffalo Outer Harbor – A torrential summer evening in July will go down in local Hip lore as one for the ages.  See my full review here: http://www.examiner.com/review/the-hip-and-grace-too-cut-short-by-rain-at-outer-harbor

Smokey Robinson at Seneca Niagara Casino – Like Aretha, he’s lost nothing vocally, and still knows how to work a crowd into submission.  See my full review here: http://www.examiner.com/review/smokey-robinson-s-casino-set-makes-for-an-ideal-date-night

Styx at Fallsview Casino – Gowan, Tommy Shaw, and James Young had the band firing on all cylinders throughout.  See my full review here: http://www.examiner.com/review/styx-makes-a-convincing-case-at-fallsview

Kim Mitchell at Seneca Niagara Casino – The fact that he served up a healthy mix of solo and Max Webster deep cuts pushed it over the top.