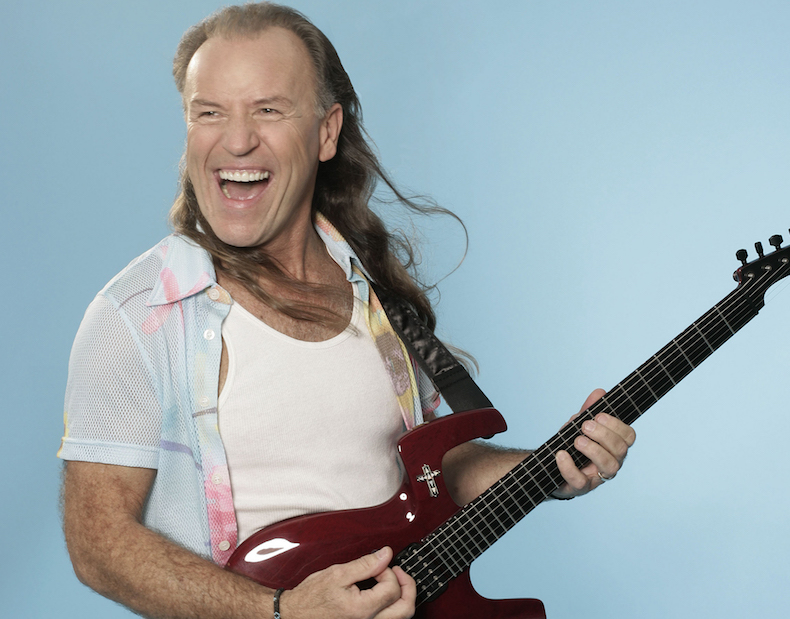 The nominations for the Rock and Roll Hall of Fame Class of 2019 were announced yesterday, and, yet again, Grand Funk Railroad didn’t make the cut. Somehow, a band responsible for selling out Shea Stadium faster than The Beatles and racking up more than 30 Million records sold worldwide isn’t qualified to join a club that also considers Bon Jovi and Green Day to be worthy of membership. If you’ve ever felt that I.M. Pei wasted a spectacular design on an organization whose credibility is further hemorrhaged with each passing year, you’re not alone, because Grand Funk’s founding guitarist/songwriter Mark Farner has no love lost for them either.

Then again, Farner’s success has never been predicated on sucking up to the suits responsible for dictating who’s in and who’s out. He’s carried out a 50-year quest to bring his musical message to those who matter, which, in his case, are the legions of everyday fans with whom his songs continue to resonate.

“Are You Ready,” “I’m Your Captain (Closer to Home),” and “People, Let’s Stop The War” are timeless compositions that, when heard in 2018, hark back to a time when the mainstream rock scene actually had a pulse. He wrote and played what was in his soul, and the lightning-in-a-bottle created when his vision became fused with the dynamic rhythm section of Mel Schacher and Don Brewer is something that younger bands can only hope to duplicate.

I had the pleasure of speaking with Farner recently about his journey through the industry as well as what fans should expect when he commands The Riviera Theatre stage on Nov. 3. Don’t let the lack of percussion dissuade you. This will be one of the finest rock shows of the fall, despite how under-the-radar its local promotion has been to this point.

MNOD: Your upcoming show in North Tonawanda will be an unplugged evening. How does the acoustic element impact what songs make it into the set?

Farner: It affects the set to a great degree, because there are certain songs that just can’t be pulled off well acoustically. There’s no percussion, obviously, so we try to mix it up every night. We’ll play the hits, but we’re also throwing in some obscure things such as “Mr. Pretty Boy” and “Little Johnny Hooker” from 1974’s “Shinin’ On.”

MNOD: What do you think it is about Grand Funk’s music that continues to resonate with audiences?

Farner: I started out writing music in 1968 and had my first album in 1969. My songs have always tried to inspire people to think and live life to the fullest. I think there’s a sense of innocence there, as well, because we were young boys starting out in Flint, Michigan and our success came really fast. When I wrote “People, Let’s Stop the War,” that instantly struck a chord with both veterans and current soldiers. The same goes for “Closer to Home,” because it reminded them of home and they just wanted to be out. Those themes are still relevant for me.

MNOD: What motivates you to continue touring?

Farner: I love to see the smiles and also to get the audience involved. We’re not just standing up there playing in silence. I’m running around like a chicken with my head cut off. We’ve put together an upbeat, entertaining show that satisfies my need to be out there. I’m hooked on performing live.

MNOD: I know that Grand Funk Railroad has been consistently shunned by the Rock and Roll Hall of Fame, but is the possibility of being inducted even something you’ve thought about?

Farner: It’s such a political thing, because there are so many acts that just don’t belong in there. Music is meant to inspire people and the whole thing is just a misrepresentation of what the spirit of rock and roll is really about. It’s not something that should be held in a time capsule in Cleveland. I’ve always been skeptical, because it’s so politically run.

MNOD: Do you have any desire to reunite with your former bandmates in the future?

Farner: I’ve been trying to convince them to reunite for 20 years. I don’t like what happened when things ended, but there was a lot of jealousy, strife, and typical BS. It’s like trying to get two married people back together after years apart. There’s going to be a lot of static, but I would do it for the sake of the fans. I was a huge Beatles fan and I always wanted them to bury the hatchet while they were all still sucking air. It should always be about the fans. Look at ZZ Top. They’ve had the same three guys the whole time and they have three separate buses when out on the road. They go out there and play for the people, and then go their separate ways afterwards. They’ve been able to make it work, so we should be able to, as well.

MNOD: Todd Rundgren had a significant role in production during the early years. What do you remember most about his contributions?

Farner: He’s a natural talent and easy to work with. We would be playing a take in the studio and he would have his feet up on the console reading a book, which was how laid back he was all the time. I remember I was walking back to the studio one day and I was singing “The Locomotion.” Todd asked what I was singing and I said ‘That’s The Locomotion,’ so he immediately thought we should record it for the album. Carole King wrote the song originally and Little Eva was actually her housekeeper who recorded the song after Carole heard how good she was. We had analog tape in those days and Todd would just hit the button while saying that we had to strike while the iron was hot. My guitar sounded like it was eating itself.

MNOD: Your last solo release was 2006’s “For the People.” Do you have any plans to release another album in the future?

Farner: I’m always getting my message out there. On YouTube right now is a video for “Can’t Stop,” a project that originated from the Rock and Roll Fantasy Camp. I had been a counselor for them two or three times and the guitar player reached out to me with a proposal for a video. They had scripted a story, so I went out to Los Angeles and we got it done. We have a half million hits, so far. I also have a project titled “Mark Farner To Chile With Love,” which is a live DVD from a show I did in Santiago. There will be a live CD of the concert featuring four or five previously unreleased tracks that I’ve been working on. I have a lot of ideas and I’ll get constipated if I don’t get them out. I don’t want to get constipated.

MNOD: Patriotism plays a significant role in your message. What do you think about the state of the country right now?

Farner: The deregulation of the FCC by the Clintonistas in 1996 essentially raped and pillaged the media market. It took ownership from American families and placed it in the hands of a few select corporations that don’t really believe in America. As a kid who grew up in Flint, it makes me sick to my stomach to see so many foreign cars and foreign tin driving around. I felt like I lived through the greatest era in US civilization given how much innovation there was during my childhood and now nothing is as it appears to be. The conscience is gone. I refuse to believe anything that the mainstream media puts out there, because it’s all coming from a corporate conglomerate. If you want to see what happens when you stop supporting your country, just look at Detroit, Flint, or Pontiac. I’ve had enough of this New World Order and One World Government horsecrap. I think the people of the United States can see through all the smoke and mirrors and realize what’s really going on. Donald Trump was right to call it fake news, because that’s what it is and it’s working to ruin this nation as we know it.

MNOD: Are there any younger bands that you feel can achieve the same level of success that Grand Funk Railroad had?

Farner: There’s not much out there right now. I’ve seen a lot of opening acts and they just don’t have the chops. The thing about music now is that older bands don’t even need all of the original members to remain a draw. Take Foreigner, for example. They’re the original band in name only, which is really an insult to the fans. Naming rights can be licensed to anyone, so you can have multiple versions of a band out there without any connection to the real thing. I was talking to Gunnar Nelson and he told me that there are 126 different versions of The Platters out there, because some guy sold the naming rights. Fans come to see the band they remember from when they were teenagers driving their hot rods, not a lame imitation. With Grand Funk, I like to call them the Faux Funk, because they needed three guys to replace me and have prevented me from even using the name in my advertising. I can’t even make a statement as to who I am when promoting a show. You can’t counterfeit talent, though, so I’m going to continue to do what I do without worrying about what’s going on with them.