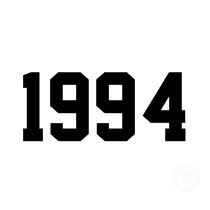 I was six-years-old in 1994, but that didn’t stop me from drinking up every ounce of pop culture juice I could get my hands on. The M in MTV still mattered and the loss of Cobain meant that the industry had to embrace a cornucopia of musical styles while discovering whether or not there really was life after grunge.

Sure, there are plenty of cultural touchstones etched in my memory between 1990 and 1993, but ’94 was the year where everything came together. Once cassette copies of both “Dookie” and “The Blue Album” came into my possession, the possibilities were endless.

25 years later, the sounds from those 12 months still resonate as deeply as any I’ve experienced in my lifetime, and, judging from the amount of online discussion on the topic, I know I’m not the only one for whom 1994 was a watershed moment.

What follows is a list of 25 songs that I consider to be standouts from a year where even the omissions are worthy of repeat status. If you haven’t heard these in a while, well, you’re welcome for giving you even more ammunition for your 2019 summer playlist.

Tori Amos – “Cornflake Girl” – No one straddled a piano bench quite like Amos in her prime. She was seductive, playful, and wickedly intelligent without ever conforming to the industry’s idea of what a female artist should be. Her vision throughout “Under the Pink” is flawless, but, if you’re new to her work, “Cornflake Girl” is a great place to start.

Soundgarden – “The Day I Tried to Live” – I awoke the morning of May 18, 2017 with every intention of heading to Columbus, OH to see Soundgarden headline the opening night of Rock on the Range, but, instead, my excitement turned to shock as news of Chris Cornell’s suicide began to filter in. He was every bit as significant to the decade as Cobain and hearing him wail on a tune about being closed off to the act of socializing with other people never fails to speak to me as an introvert.

Warren G and Nate Dogg – “Regulate” – It doesn’t matter who you are or where you come from. When we hear the chilled back-and-forth between Warren and Nate set atop an ingenious sampling of Michael McDonald’s “I Keep Forgettin’ (Every Time You’re Near),” we all want to hit the east side of the L.B.C.

Hootie and the Blowfish – “Let Her Cry” – Hating on Hootie became commonplace for critics following the release of the band’s second LP in 1996, but their debut remains a solid contribution to the era. Darius Rucker’s superb vocal on “Let Her Cry” hits its target every time.

Pearl Jam – “Spin the Black Circle” – They embraced their inner punks on this rager from “Vitalogy” and its inclusion on the 2004 Greatest Hits album solidified its legacy.

Hole – “Violet” – You probably have an opinion of Courtney Love that has absolutely nothing to do with her music, but don’t let the tabloids fool you. When she was on, she was on with an intensity that few others could match.

Weezer – “Say It Ain’t So” – Weezer’s output since 2000 has been hit-or-miss for me, so revisiting the rawness of “The Blue Album” is necessary for remembering just how great they can be.

Beastie Boys – “Sure Shot” – The verse “I want to say a little something that’s long overdue The disrespect to women has got to be through To all the mothers and the sisters and the wives and friends I want to offer my love and respect to the end” was both an apology for their past misogyny and a memo to the rest of the hip hop community that enough was enough.

Barenaked Ladies – “Jane” – 1998’s “One Week” was the best and worst thing that ever happened to this band, because it became their only No. 1 single in America while simultaneously misleading people into thinking that all of their music sounds that way.

R.E.M. – “What’s the Frequency, Kenneth?” – Here was the Athens-formed quartet proving that they were still full-on rock stars.

Oasis – “Live Forever” – It was an anthem of optimism at a time when the Seattle scene was churning out everything but.

Megadeth – “A Tout Le Monde” – As close to a ballad as Dave Mustaine gets and it’s beautifully rendered.

Corrosion of Conformity – “Albatross” – Sabbath-esque sludge metal for the next generation.

Stone Temple Pilots –  “Silvergun Superman” – “Purple” was littered with hits, but this was the unsung highlight of STP’s sophomore release.

Green Day – “When I Come Around” – I prefer the snotty realism of 1995’s “Insomniac,” but I’d be remiss not to acknowledge the impact this song had on me at the time.

Jeff Buckley – “Hallelujah” – Buckley is the reason why everyone else started covering “Hallelujah.”

Sophie B. Hawkins – “Right Beside You” – She followed up on the strength of 1992’s “Tongues and Tails” with ease.

Urge Overkill – “Girl, You’ll Be a Woman Soon” – This cover of Neil Diamond was made even more iconic when Uma Thurman sashayed across her living room in “Pulp Fiction.”

Lisa Loeb and Nine Stories – “Stay (I Missed You)” – Loeb’s vulnerability is infectious.

Nas – “Life’s a Bitch” – Some of his most lyrically complex verses were born here.

Portishead – “Glory Box” – Was there a more affecting vocal presence in the ’90s than Beth Gibbons?

Live – “I Alone” – Ed Kowalczyk proved that alt-rock spirituality could bring with it commercial accessibility.