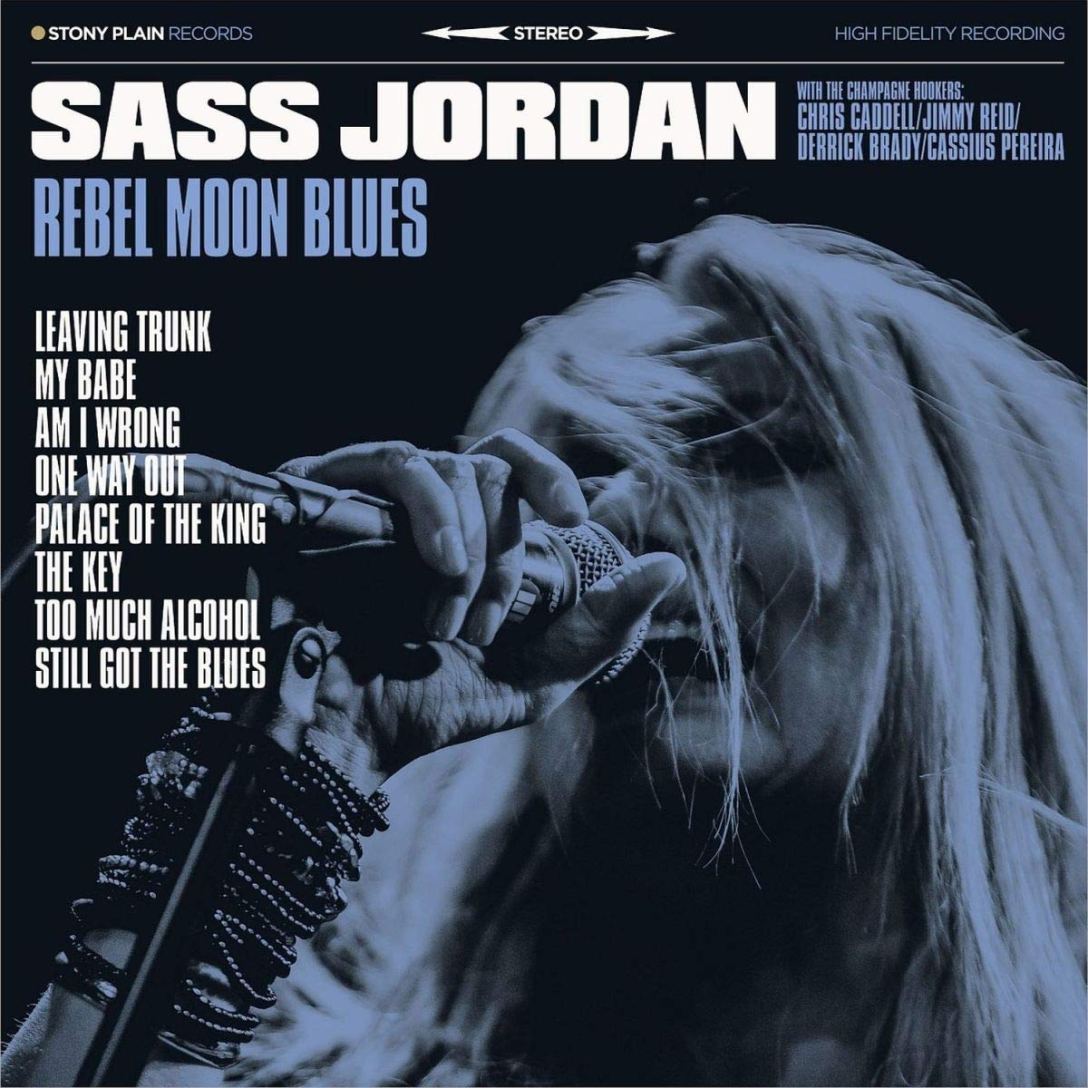 My relationship with the music of Sass Jordan began when I was a teenager. Rather than indulge in whatever drivel was being peddled by Top 40 radio in the early ’00s, I sought out artists whose work reflected a deeper understanding of what really matters in the grand scheme of things. Thus, the uncompromising rawness of Jordan’s 1994 album “Rats” became an ideal alternative to the tedium of Coldplay’s “A Rush of Blood to the Head.”

Her voice was a revelation, and, the more I listened, the more I found it  incomprehensible that she wasn’t huge in America. I only discovered “Rats” and then 1992’s “Racine” later on, because I happened to live in a border town that had access to Canadian radio. Here was one of the finest rock singers, male or female, I’d ever heard and the amount of acclaim she received was but a fraction of what the inconsequential pop stars of the day were getting with very little effort.

It is my hope that her new project, “Rebel Moon Blues,” will bring her the respect she deserves beyond just the longtime fans. I spoke with her via telephone recently about the album and how she’s been navigating through these crazy times, so, if her Oct. 10 date in Buffalo goes down as scheduled, it promises to be one hell of a show.

MNOD: With the world in a constant state of flux due to COVID-19, how have you been dealing with the isolation?

SJ: Well, you know, it’s not really that different from what I normally do during a break from the road. I live such an outward life when performing, so, when I go home, I like to collect my thoughts and have time to myself. This is just an extended period of that. If you pay attention to the news or any mainstream media, there’s a constant barrage of information that can make you squirelly after a while. It’s really challenging to know what’s true and what’s not, because we’re living in such a surreal reality.

MNOD: How frustrating has it been to have this stellar new album out and not be able to share it with people in a live setting?

SJ: Not really. What I like about it is that it’s giving people time to get to know the album and become familiar with it. That way, when I do return to the live shows, the songs will be more fun for the audience and they’ll feel like an old shoe that they’re used to. I want to do a live stream soon, but it’s hard to predict when that will be.

MNOD: What inspired you make an entire blues record this time?

SJ: I was asked to do it. I was initially resistant, but then I said ‘Who gives a crap what anyone else thinks?’ Never Mind the Bollocks, as they say in England. The more I looked into it, the more I realized that it’s not all that far removed from what I’ve always done. The style is something I’m extremely close to. “Still Got the Blues” is the song that started the whole thing, because I started discovering all these other songs that never occurred to me before. There were no hard and fast boundaries.

MNOD: How did you decide which songs to cover?

SJ: They just sort of came to me. I would be driving, hear a cool song, and then do some research on YouTube, which of course is a rabbit hole. The more songs that I looked up, the more suggestions it would give me as to other songs I might enjoy, so I followed that. There are eight songs on the record and seven of them arrived almost with a light around them to signal that they were perfect for me.

MNOD: What did you bring to this material as a female voice that is different than the original versions?

SJ: I would say that it’s more about my personality than gender, because anyone singing these songs would bring themselves to the process. The energy is what comes through the most, so the fact that I’m a woman doesn’t affect it that much.

MNOD: “One Way Out” became popularized when The Allman Brothers Band released a live version of it on 1972’s “Eat a Peach.” What did you do to make the song your own?

SJ: I’ve always loved that song, so I think the same answer applies here. I chose it, because I like it. I brought my own personality to the song.

MNOD: “The Key” is the lone original composition on this album, but it’s a knockout. How did this one come together?

SJ: I wanted to write at least one original song for the album and this one came together so quickly. Derek (Sharp) came up with the chord progression and the words just sort of happened. The whole thing only took about 30 minutes to take shape. A lot of people think that successful songs take a long time, but that’s not always the case.

MNOD: Have you found that your other successes followed that same philosophy?

SJ: 1000% yes. Things that work or become really successful are usually things that come together incredibly quickly. They just sort of happen out of nowhere. For me, I know that, if I spent ages working on something, I would start to second guess myself the longer the process went on, so it’s better to just go with your instinct. The thing about this album is that there were no obstacles or impediments along the way. Everything fell into place for an extraordinary experience.

MNOD: “Am I Wrong” is a track that not a lot of people are familiar with, but I loved your take on it. How did that wind up on the album?

SJ: My guitar player and I have a disagreement as to who discovered it first, because he claims that he suggested it and I believe that I found it on YouTube first. He says that he sent me the link, but, in my reality, I found it while researching.

MNOD: Because of how well this album turned out, would you like to do another blues collection in the future?

SJ: 1000% yes. I love it, because, right now, having the album out there is the best way for me to reach as many people as possible. Sometimes, things happen during the course of an album that you have to figure out or find your way around, but nothing like that happened here. It all came together perfectly. Even the picture on the cover was perfect. It was taken by a Dutch photographer who happened to be taking pictures during a show. I didn’t even know he took it, but then he shared it on Instagram. Normally, I can’t stand pictures of me while performing, because they either get you with your tonsils hanging out or looking like 50,000 tons, but this photo is fantastic. I told my manager about the shot and we agreed that it would be perfect for the cover, so the photographer sold it to us and it worked. With the smoky blue color scheme on the vinyl release, it looks like an old-school blues or jazz record, which I love.

MNOD: Your Buffalo date appears to have been rescheduled for Oct. 10, so hopefully we’ll see you then.

SJ: Yes, I look forward to seeing you and everyone else who wants to come out to the show when all of this craziness is over.

“Rebel Moon Blues” is available now wherever music is disseminated, but do us all a favor and pay for a physical copy.